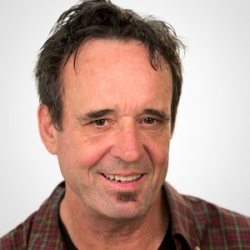 Dan Olmsted grew up in Palo Alto, CA and learned film production as a graduate student at SF State. He then joined the staff of Berkeley's Saul Zaentz Film Center, where he worked for 15 years as a recordist, sound designer, and re-recording mixer on many feature films and documentaries. He now works around the Bay Area as a sound mixer and designer, on the staff at Berkeley Sound Artists, as well as teaching film production classes at several local colleges and universities.