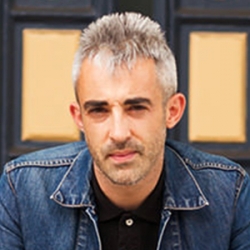 Office hours by zoom and by appointment

David de Rozas is an Emmy-nominated and award-winning filmmaker who directed and produced GIVE, winning seven international awards including Best Short Documentary at FullFrame  Film Festival and Best Experimental at the Smithsonian African American Film Festival. The film was nationally broadcasted on P.O.V. in 2018. His practice merges experimental, documentary, and contemporary art forms, revisiting and relocating the politics of memory within the past-present-future tensions of colonization and decolonization. De Rozas films have been screened in festivals and film curated series worldwide, such as Visions du Réel, Sheffield Doc/Fest, True/False, or Kassel DocFest. He is working on two features 'Here We Is' that focuses on the current Los Angeles’ Downtown explosive development, and 'The Blessings of the Mystery' a labyrinth of stories across Far West Texas’ environmental memories. David is a 2020 Artist in Residency at the Headlands Center for the Arts