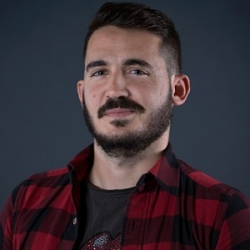 Pablo Riquelme started as an actor in Spain when he was 11 and decided to get behind the camera around the same time to direct his first short films. Since then his work has been selected in prestigious Film Festivals like Sitges Horror Film Festival and Los Angeles Independent Film Festival. He directed his first feature movie in 2010, "Armengola. La leyenda", and after five years working as a film critic and getting a Media Studies Degree in the movie studios CIUDAD DE LA LUZ, Pablo moved to Los Angeles, California, to study film directing at UCLA. In Hollywood, Pablo directed the promotional videos of the singer and Vogue magazine model Josh Beech, and his thriller "Dead Flowers" is now available on Amazon Prime Video. It's won eight awards including best movie, and best screenplay. He's currently living in San Francisco, California, where he became a Diplomatic citizen by the Fulbright Commission. His newest work, "Heads Will Roll", stars the famous Horror Film icon, Tony Todd. Pablo is also working in Hollywood in the development of two feature films.