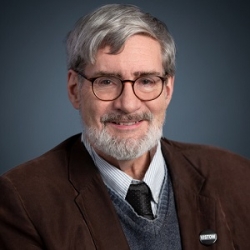 Schedule an appointment through Calendly

Professor McBride, who has taught at SF State since 2002, has written or edited sixteen books. They include the critically acclaimed biographies Frank Capra: The Catastrophe of Success, Steven Spielberg: A Biography, and Searching for John Ford; three books on Orson Welles; and the Howard Hawks interview book Hawks on Hawks. In 2012, McBride’s book Writing in Pictures: Screenwriting Made (Mostly) Painless will be published by Vintage Books (New York) and Faber and Faber (London). Many of his books have been published in foreign editions; the French edition of Searching for John Ford, A la recherche de John Ford, won an award in 2008 from the French film critics’ association as Best Foreign Film Book of the Year. McBride was a reporter, reviewer, and columnist for Daily Variety in Hollywood for many years. His screenwriting credits include co-writing the cult classic punk rock musical Rock ’n’ Roll High School and five American Film Institute Life Achievement Award specials on CBS-TV. He has received a Writers Guild of America Award, four other WGA Award nominations, two Emmy Award nominations, and a Canadian Film Awards nomination. He spent six years acting for Welles as a film critic in the still-unfinished film The Other Side of the Wind, for which he wrote his part with the director.