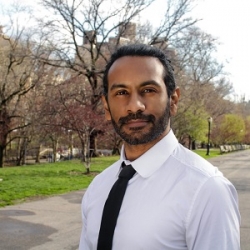 Mayuran Tiruchelvam is a screenwriter and producer of fiction and non-fiction stories for film and television. His filmmaking is fueled by a vision for a more compassionate and openhearted world. His activist work focuses on the abolition of prisons and policing, as well as solidarity-building between global communities in resistance.

His feature screenwriting and co-producing debut, neo-noir THE GIRL IS IN TROUBLE, executive produced by Spike Lee, was released by eOne in April 2015 and a critics' pick from the Village Voice and RogerEbert.com

Mayuran's producing credits include the documentaries TO BE TAKEI – a portrait of actor, activist, and pop-culture maverick George Takei (Star Trek), which premiered at the 2014 Sundance Film Festival, and THE UNTOLD TALES OF ARMISTEAD MAUPIN - following beloved San Francisco author's journey to open-hearted LGBTQ icon (winner, Audience Award, 2017 SXSW). His fiction-producing credits include ACROSS THE SEA (Audience Award, Slamdance 2015), a Turkish-U.S. romantic drama; sibling comedy THE MEND (SXSW 2014), and the coming-of-age thriller MY FIRST KISS AND THE PEOPLE INVOLVED.

He previously taught at Columbia University's Graduate Film Division and Sacred Heart University's Film and Television Masters Program. He is a Sundance Institute Creative Producing Fellow and Film Independent Fellow and a member of the Directors Guild of America.