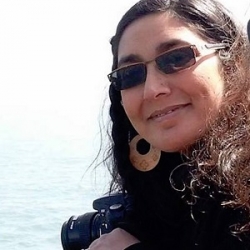 Behrens is an award-winning director and producer whose projects have been screened at festivals nationwide.  Her work engages issues that influence the human condition and the political landscapes that shape identity and power structures within marginalized communities.  She is in post-production on a documentary film that chronicles the forced demise of a community-recycling center in San Francisco due to gentrification efforts.  Behrens produces a range of projects at the DocFilm Institute including the Veteran Documentary Corps as well as a number of feature films.   She recently appeared on CNN Dialogues in conversation about film and social justice.  She has also presented work at the Tides | Thoreau Center series, Righting Wrongs: Celebrating Human Rights in Action.