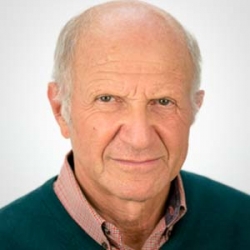 Steven Kovacs began as a film historian, writing the book From Enchantment to Rage: The Story of Surrealist Cinema. He taught at Stanford, where he co-produced the documentary Arthur and Lillie, for which he received an Academy Award Nomination. He worked as head of production for Roger Corman's New World Pictures (1977-79). He has produced, written, and directed a number of features, including The Lady in Red, On the Line, '68, and Angel Blue. He was invited to chair the SF State Cinema Department in 1990 and has taught here ever since. He has written criticism on art, film, and politics, poetry, and fiction. He has taught a wide range of courses, including screenwriting, directing, and national cinemas, particularly European and Latin American. He received a Fulbright Fellowship to the Hungarian Academy of Theater, Film, and Television in 2002-2003.

Amusing Tales from Fifty Years of Film – What Has Changed? - Vimeo (password SFSUFILM21)